Leslie Thornton’s ‘Peggy and Fred in Hell’ is an experimental film-video serial project coaxed in deep obscurity, evoking a sense of open-endedness and temporal indefiniteness. Distinct years are strew around the web, variously indicating additions of footage to the assemblage or screening dates, but despite these one cannot placate the jagged, hazy nature of the work, nor its current status. Any given review can only attempt to vaguely approach it, always a step behind, not knowing what exactly it’s facing.

On my computer I have the eponymous 95 minute file, but there’s no way to verify its authenticity or completeness. Any bootleg sources are intrinsically unreliable, contact with the filmmaker — insofar as even she has a grasp of her “lifelong project” (given it’s not necessarily a linear creation, and any publicised version could easily re-edited by someone else) — uninvited. The only option is to let go, allow oneself to be lurched into the kaleidoscopic expedition to Hell.

The Television and Radio constitute zones of audiovisual infiltration, thus reaching the viewer & kids’ senses, as well as encroaching upon the film material itself — from the onset the medium confronts its own plasticity, with the distinction between original and found footage collapsing, the potential of non-linearity, rewinding, contamination, and decay presaging, the techniques and elements of creation necessarily enabling their own dissolution. Pete the penguin is forever trapped as a wraith within the film material, but his existence is only guaranteed insofar as he’s continually manipulated and killed, over and over again.

Peggy and Fred too are enmeshed in a variety of processes, most of all their unique imaginative minds, spouting seemingly glossolalic jabbering and singing. Whether they’re locked in a cluttered almost-anachronistic apartment or playing on non-chartable eerie territories, there exists no higher order power with control over them, they co-exist — along with everything else — within a self-propelling schizophrenic process, a matrix of potentialities, a mixed-up televised world unfolding before the viewer, an experimental serial. 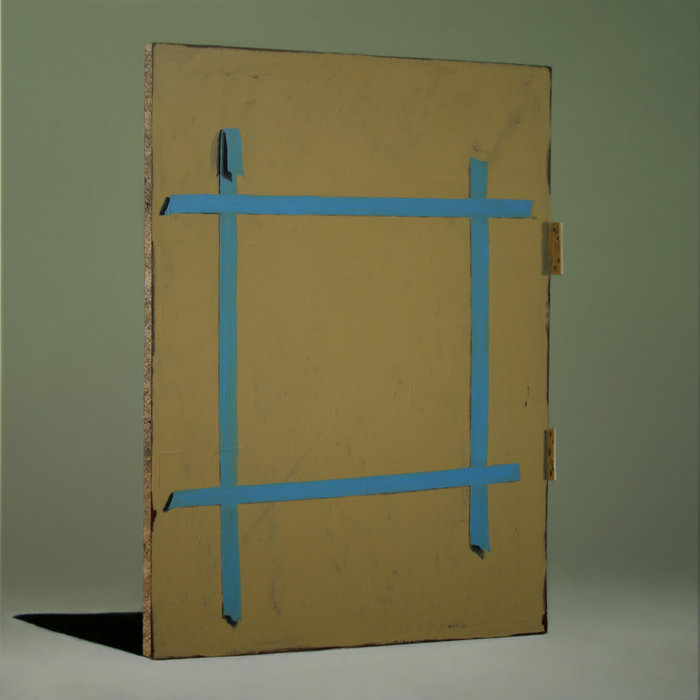 Today The Caretaker released the final Stage of his long-running music series Everywhere at the end of time (as well as a bonus album Everywhere, an empty bliss), marking the completion of Kirby’s project. Having re-listened to the whole series today, I can reliably say it’s one of the greatest and most poignantly harrowing pieces ever created, a profoundly enveloping sinking into the recesses & expanses of utter confusion and deep temporal fractures. From crackling anemoia-inducing warm melodic ballroom pop recordings, to the sonic dimensions of intractably atmospheric complex ambient labyrinths, the intensity of the work is unmatched, its honesty gripping, its implications daunting. Ontological indeterminacy flourishes, the linear progression of time is upset, the coordinates of space washed away, the disassembling mind a sputtering collage of decaying memories, empty blissful feelings, a hazy patch of incoherent fog, an eerie cry into the void.

A1 – It’s just a burning memory

END_OF_DOCUMENT_TOKEN_TO_BE_REPLACED

Tonight while unable to fall asleep, I’ve decided to put on some drone music, hoping it would smother the intrusive thoughts and gradually soak me into placidity. No luck; moreover the drone record itself — Éliane Radigue’s ‘Trilogie de la mort’ (rym link) — was quite unwaveringly intense and stimulating, especially in the last third (when previously unheard instrumental layers such as befogged bagpipes emerge), during which this post’s title suddenly popped into my head. I was simultaneously reminded of black metal pieces with characteristic repetitive drumming and different aural layers progressively joining in during later parts (most notably Burzum’s Jesus Død and Paysage d’Hiver’s Welt Aus Eis), The Caretaker’s amazing ambient turntable “[falls] further and further towards the abyss of complete memory loss and nothingness”, and Mihály Víg’s compositions for Béla Tarr’s films, particularly the carnivalesque theme in Sátántangó and solemn one in The Turin Horse. For me all these disparate pieces of music convey an open-endedness and continuity, with their apparent repetitiveness obviously crafting a particular atmospheric haecceity, yet their incessant smaller variations, additions/subtractions of quantities, escalations/fading of qualities, a sense of complexity germinating on smooth flatness, and noise infused by the inexorable flow of time itself, all produce within the immanent field a sense of change, becoming, fluidity, ever-lastingness. Moreover, whatever is listening enters into composition with the music, suggestive of an intensive continuum, the whole cosmos enveloped by and itself intermixed drones… eternal recurrence of the same, eternal recurrence of difference, eternal recurrence of nothing.

I’m necessarily reminded of Mark Fisher’s writings on Joy Division compiled in his ‘Ghosts of My Life’.

[In ‘She’s Lost Control’] Joy Division’s icy-spined undeath disco sounds like it has been recorded inside the damaged synaptic pathways of a brain of someone undergoing a seizure, Curtis’ sepulchral, anhedonic vocals send back to him — as if they were the voice of an Other, or Others — in long, leering expressionistic echoes that linger like acrid acid fog. ‘She’s Lost Control’ traverses Poe-like cataleptic black holes in subjectivity, takes flatline voyages into the land of the dead and back to confront the ‘edge of no escape’, seeing in seizures little deaths (petil mals as petit morts) which offer terrifying but exhilarating releases from identity, more powerful than any orgasm. (p.54)

What separated Joy Division from any of their predecessors, even the bleakest, was the lack of any apparent object-cause for their melancholia. (…) No heat in Joy Division’s loins. They surveyed ‘the troubles and the evils of this world’ with the uncanny detachment of the neurasthenic. Curtis sang ‘I’ve lost the will to want more’ on ‘Insight’ but there was no sense that there had been any such will in the first place. (p.58)

And so on. Reverberations of Fisher’s particular conception of immanence: Gothic Materialism. His “flatline” is a nice analogy to “drone”; the electrocardiogram/electroencephalograph shows ∃T∈ℝ (btw ℝ’s cardinality is called “continuum”) s.t. ∀t>T “line”(t) = 0, but my senses could swear there are some small (where “small” and the dependent variables / “line” function are left undefined) variations on that still-flowing line!

Anyway, this was just a hasty thought, too lazy to look for more references or anything, time to  try to get some sleep.

“I don’t sleep, I just dream,” says Rust Cohle after being explicitly told by his partner to “Stop saying odd shit.” Concurrently, a mysterious untraceable train horn resounds in the background, knitting a connection, a thought.

Rust is right. The organism never rests. True sleep can only mean eternal oblivion. [But even after an organism’s death, matter continually transforms itself further, pulsating and willing, on the everlasting unlife plane of immanence.]

In sleep our nervous system is continually agitated by a multiplicity of inner events, almost all our organs are active, our blood circulates vigorously, the position of the sleeper presses on individual limbs, his bedcovers influence his sensibilities in various ways, his stomach digests and its motions disturb other organs, his intestines are active, the position of his head involves unusual muscular contortions, (…) – all this, through its unusualness and to a differing degree each day, excites the entire system up to the functioning of the brain; and so there are a hundred occasions for the mind to be involved in puzzlement … (Nietzsche, Human All Too Human, §13

Brain activity never ceases, always productive and perceptive. Things impinge upon cognition all the time. Sleep is yet another rhythmically recurring state, a modulation. An electroencephalograph continues drawing up cryptic data.

Dreaming labels those hazily-detected dynamics. “We create and perceive our world simultaneously and our mind does it so well we don’t even know what’s happening.” It’s an incessant flow of emotions, desires, and hallucinations, a complex web with pulsating zones of intensities, thresholds, zany characters, horrors, games, and mysteries, a streaming labyrinth dissolving all subjective orientation. “Dreams feel real while we’re in them. It’s only when we wake up that we realise something was actually strange.”

It’s pretty common for long-distance travelling vehicles like trains to put its passengers into a trance-like hypnagogic state. The constant flow of scenery, being seated on the same space, the mere novelty of travel or weariness after daily drudgery, all contribute.

My head against the window and “I” succumb to the sleeping machine. Imagined scenes, inspired by the text on the book and/or sounds coming from my headphones, commingle with the auto-generated dream-sensations, as well as the moving scenery outside the window. Colours start to appear. The dazed “I” drifts in and out of consciousness, my eyes occasionally open and start gliding over the text again, reading the exact same passages they had before, and my ears pick up on some of the melodies again, but soon I slumber back into the sway and obscurities of the productive unconscious machine. Until after an unspecified amount of time, I arrive at my lucidly chosen destination. Or do I?

When positioned outside one, trains traversing the world are dreamy too. With their aforementioned vibrant train horns, travelling “na tej bocznej zapomnianej linii” (forgotten branch lines) (Schulz, Sanatorium Pod Klepsydrą) in unknown (techno?)landscapes, or weirdly appearing out of nowhere, penetrating the topography like an intrusion, an infiltration, perhaps without a telos, just transitioning for its own sake, continuing rolling on and on, like time. “You’re waiting for a train. A train that will take you far away. You know where you hope this train will take you, but you don’t know for sure.” 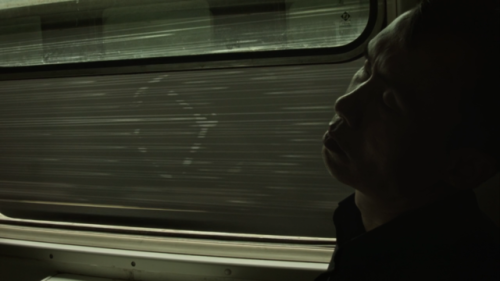 For a delightfully psychedelic & insectlicious sci-fi masterpiece, see Saul Bass’ Phase IV, where an adaptive intelligent ant hive mind communicates with and fights a couple sufficiently brave and unhinged human scientists, on unrelenting game theoretic grounds, within a desolate sun-scorched desert ocean, with subterranean complex tracts, the first (ever!) crop circles, and alien monoliths. This is the film to behold for extended wordless sequences of insect savagery in stunning magnifications, as well as (communicable) information distilled to pure hive mind dynamics, abstractly charted. Lovecraft’s “things have learnt to walk that ought to crawl” seems very apt.

“Now I know how a rat feels in a maze. Rats in a maze. It’s almost like a controlled experiment in which we are the subjects. Find out which rat is the smartest. The strongest. An intelligence test.”

I’d surely rank the lemniscate (from Latin, “decorated with ribbons”) among the most superb symbols, carrying such a wide breath of powerful associations and meanings. There’s infinity, eternal return, the Möbius strip, a strange loop, Ouroboros, and I’ll add one of my own: two sets/worlds with a point intersection (a threshold, a tunnel within the membranes through which strange things from the other side may infiltrate).

All these obviously interplay with each other. Think of Prof. Templeton’s episode, when he saw

strange-loop coilings of Ouroboros, the cosmic snake, who traces a figure of eight – and of moebian eternity – by endlessly swallowing itself

END_OF_DOCUMENT_TOKEN_TO_BE_REPLACED

A screenshot thread with some of the incursions from & egresses to the Outside arising in David Lynch’s 2017 Twin Peaks.

[Warning: spoilers, might take a while to load with e-lek-tri-city]